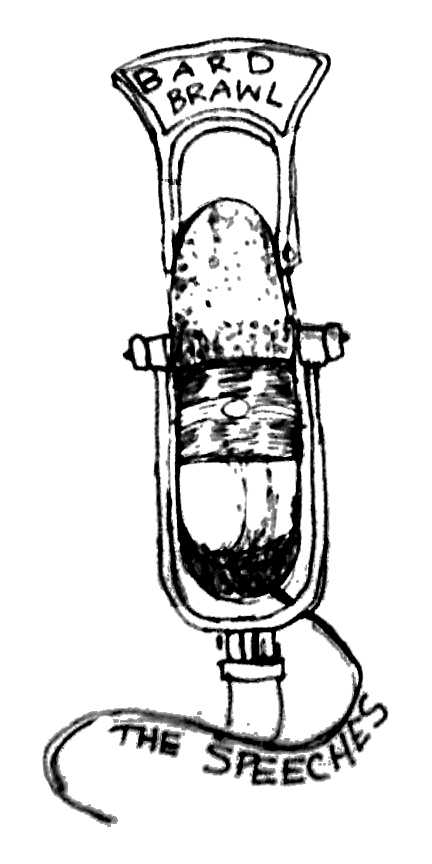 Like Caius Marius Coriolanus standing before Rome, we’ve reached the end of our exile’s path and we must now make our choice: which of Coriolanus‘ speeches are worthy of our podcast?

Welcome to the speeches podcast for Coriolanus!

Listen to the podcast here.

The more popular Julius Caesar is a parade of speeches delivered by master orators. Coriolanus though is a much messier play where dialogue, not monologue, is the norm. That makes it hard to decide where a selection should start and stop which means that I’m sure your favourites were unceremoniously sacrificed or cut short in the making of the show. But fear not! They’re still hale and whole in our five last Coriolanus podcasts. Subscribe on iTunes or download them from this blog to find out what you’ve missed!

“Hail, noble Marcius!” Act I, Scene 1 lns. 173-215
Speakers: Meneniuns, Caius Martius (Coriolanus), Second Citizen
Caius Martius barges in on this scene of civil unrest. While Menenius has been trying to appease the crowd, Martius tells them that he’d rather kill the lot of them than negotiate with them. He also suggests that while the people are quick to assume the food shortage is artificial – that the nobles are hoarding food at their expense – Coriolanus suggests that the people of Rome have done nothing to merit a dole of grain but take to the streets in protest when they should be out fighting Rome’s enemies. Are we swayed by Martius’ argument or does the play’s initial sympathy for the common people make Martius into a despot?

“How many stand for consulships?” Act II, Scene 2 lns. 1-36
Speakers: First Officer, Second Officer
Two officers, sent ahead to the Capitol to put cushions on the patricians’ seats, are speaking about Coriolanus’ nomination to the post of consul. This exchange, and others like it, are central to Coriolanus. The play is not so much about portraying Coriolanus’ actions for their own sake but rather it is about how we should interpret those actions, about the place of Coriolanus’ name in history. Is Coriolanus a victim of history, or of his pride? Should he be reviled as a tyrant or is he a hero of the Roman Republic? Is he the ultimate Stoic or a brat?

“We do it not alone, sir.” Act II, Scene 1 lns. 32-49
Speakers: Brutus, Menenius, Sicinius
This one of many exchanges where the tribunes have at it with the patrician Menenius. Menenius reminds the tribunes of their insignificance and takes them for self-serving and petty politicians. They remind Menenius that he’s got a reputation for drinking. However, Menenius sees nothing wrong with a good drink in its proper time and place. This offers an interesting contrast between two political philosophies: Menenius as the old order, the tribunes as the new. Can we tell where Shakespeare’s sympathies lie?

“It is a mind that shall remain a poison…” Act III, Scene 1 lns. 115-145
Speakers: Sicinius, Coriolanus, Cominius
Coriolanus has so many amazing lines, particularly in act III, but this is one of my favourites. Coriolanus is clearly interested in mocking and abasing the common people, but is he wrong in what he says? It seems to me that he makes a valid point: when two parties struggle for leadership, it weakens the states to outside threats. What is particularly interesting in this passage is that his remarks are addressed as much to the patricians as to the plebeians. While he describes the tribunes as the leader of a school of tiny fish and as two of the heads of the fire-breathing Hydra, he’s also quick to point out that in some ways the patricians are no better. Either they have no real authority – and should stop pretending – or they should flex their muscles and stop giving in to the tribunes’ demands.

“All places yield to him ere he sits down…” Act IV, Scene 7 lns. 30-61
Speaker: Tullus Aufidius
Menenius and Aufidius are possibly the two individuals who have the clearest understanding of Coriolanus’ character, of his strengths and weaknesses. In this speech, Aufidius paints a portrait of a Coriolanus seemingly able to conquer through force of will and presence. But even as he praises Coriolanus the soldier, he identifies the tragedy of Coriolanus’ story: so long as he can wage war, his greatness is uncontested but his inability to adapt his behaviour to new situations – to peace – mean that his greatness will be eclipsed by his own insistence on his greatness.

“Nay, go not from us thus.” Act V, Scene 3 lns. 152-212
Speakers: Volumnia, Coriolanus
Volumnia, Valeria, Virgilia and Young Martius stand before Coriolanus and beg him to spare Rome. Coriolanus makes to leave but his mother calls him back. In a last-ditch effort to sway him, they kneel in front of him. They make a show of being resigned to die with their neighbours in the his pending attack. Volumnia then suggests that Coriolanus is a bastard Volscian and as he is finally moved to make peace between the Volsces and Rome. In the end, does Volumnia move him to compassion or – as his mother suggests – is his renouncing his war on Rome just another selfish act to preserve the integrity of his name to history?

Let us know what you think!

Next week, prepare for our first ever sonnets podcast. Daniel and I will discuss Shakespeare’s sonnets 1 through 5, read each week by our wonderful sonneteers. You won’t want to miss it!

3 thoughts on “BB: Coriolanus, the Speeches”