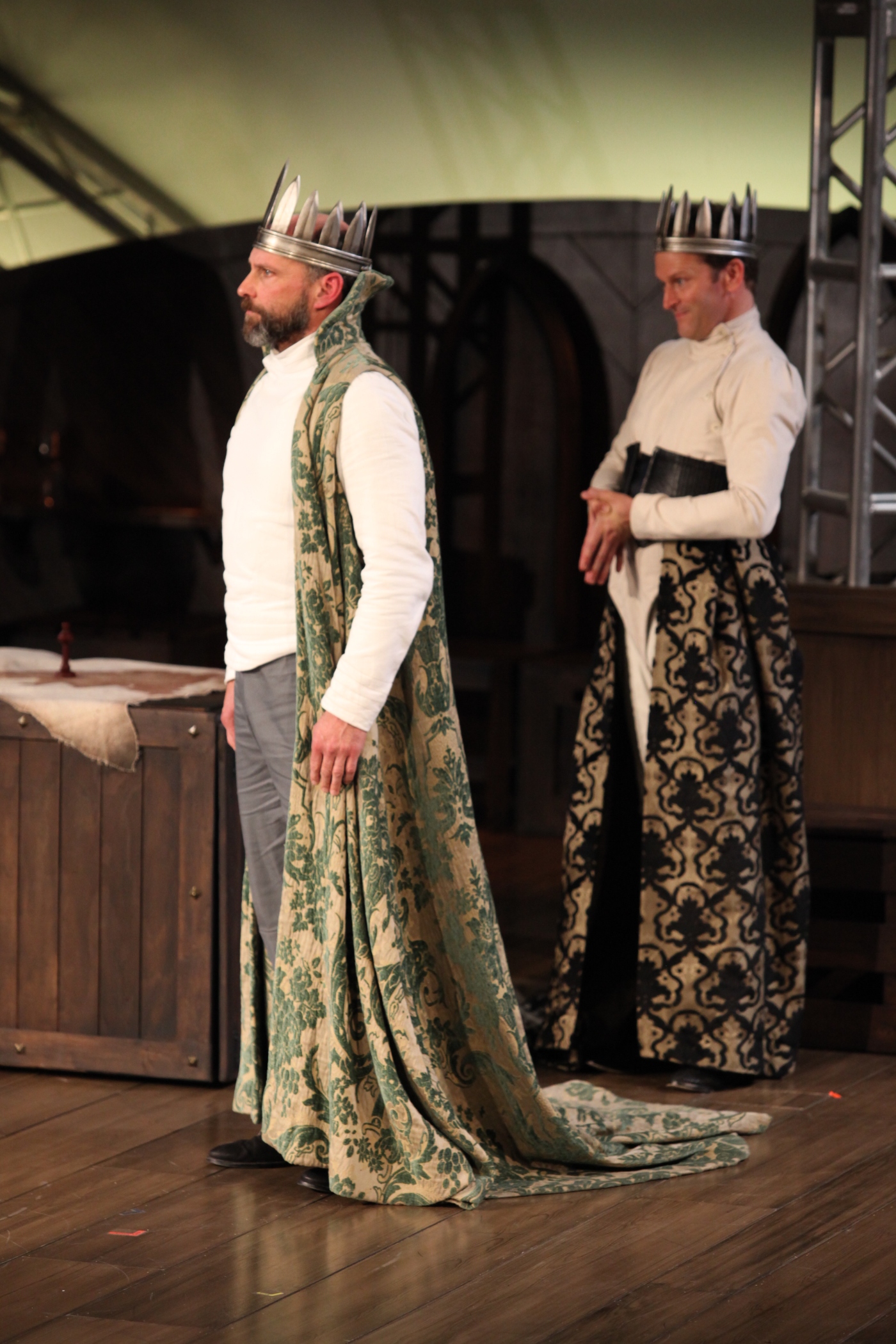 Vancouver, BC’s Bard on the Beach picked Cymbeline in 2014 as one of its four productions, and  this humble brawler let out a booyeah to be sure. It is one of Shakespeare’s most underrated, exciting and shocking plays.

It was the play I was most excited to check out this year, and the first one I took in.

Anita Rochon directs this late Jacobin-era Shakespearean play (fifth from last) set in the young Roman province of Britain during the imperial reign of Caesar Augustus at the Shakespeare festival this year.

Rochon pulls back with her choice of sets, costumes, and colours, and keeps things simple, while she pushes the energy and rhythm of the performance. She guides the ensemble cast like a team that fences its way through banishment, international struggle and redemption.

…and, you know, what happens to Cloten.

Dang this play is fun.

The six male actors swap roles and circle the female lead Imogen (Rachel Cairns), the daughter of king Cymbeline (Gerry Mackay), who tries along with his queen to force Imogen to marry her stepbrother Cloten and abandon her true love Posthumus that she’s already chosen. You know, standard boy meets girl then girl’s dad gets involved with new wife kind of stuff. Cairns is a standout in the production balancing the swirl of male actors that make up the rest of the ensemble with a steady and powerful presence on stage.

Anton Lipovetsky plays Posthumus, Cloten and Arviragus. Yep. All three. For those that haven’t read or seen the play, Lipovetsky is the romantic lead, the villain and the prodigal son in the same play. Yikes. Someone’s high school drama teacher is proud.

The audience’s laughs at the scheming queen (Shawn Macdonald) and bumbling Cloten soon dry up when the play takes a dramatic dark turn in the second half. I didn’t know what to make of the comedic tone when I first saw it. Cloten and his mother are Cymbeline’s answer to Joffrey Baratheon and Cersei Lannister from Game of Thrones; deceitful, despicable characters, and need a touch more evil running through their lines than Macdonald and Lipovetsky gave them I thought originally.

After thinking about it for a while, however, and speaking with the director, I kind of liked the chaos the contrast created. Rochon compared the play to Breaking Bad; sometimes funny, and sometimes so horribly tragic you want to close your eyes for the next week. I like the comparison.

The audience, at points, were laughing at lines and scenes that had no comedy at all. Now who’s going crazy?

Cymbeline/ jailor Mackay got a few of these, which kind of made me laugh. I’ve seen Mackay play Cassius, Alcibiades, Leontes and Achilles in various productions in past years, and was excited that he would be the king this year. He’s always an intense presence on stage.

Take those that were smiling and chuckling as Cloten delivered this monologue:

Posthumus, thy head, which now is growing upon thy shoulders, shall within this hour be off; thy mistress enforced; thy garments cut to pieces before thy face: and all this done, spurn her home to her father; who may haply be a little angry for my so rough usage; but my mother, having power of his testiness, shall turn all into my commendations. My horse is tied up safe: out, sword, and to a sore purpose! Fortune, put them into my hand! – Act IV, i

If you’re laughing at that, you may have already broken bad.

Cymbeline is a crazy mosaic of plot points, locale switches, emotional shifts and reveals that come together so nicely in Rochon’s production I like it more and more as I think of it.

The crowds will always flock to A Midsummer Night’s Dream and Romeo and Juliet, and one of the joys of Bard on the Beach is that the troupe always balances the seat fillers with lesser known selections from the Bard’s cannon.

I sometimes wonder why great plays like Timon of Athens, Troilus and Cressida and Cymbeline aren’t more popular, but, in the end, that probably has something to do with why I like them so much.

Those in Vancouver would do well to catch this production before the summer sun has left and the rain set in on the west coast.

2 thoughts on “Bard on the Beach tackles Cymbeline; directed by Anita Rochon”