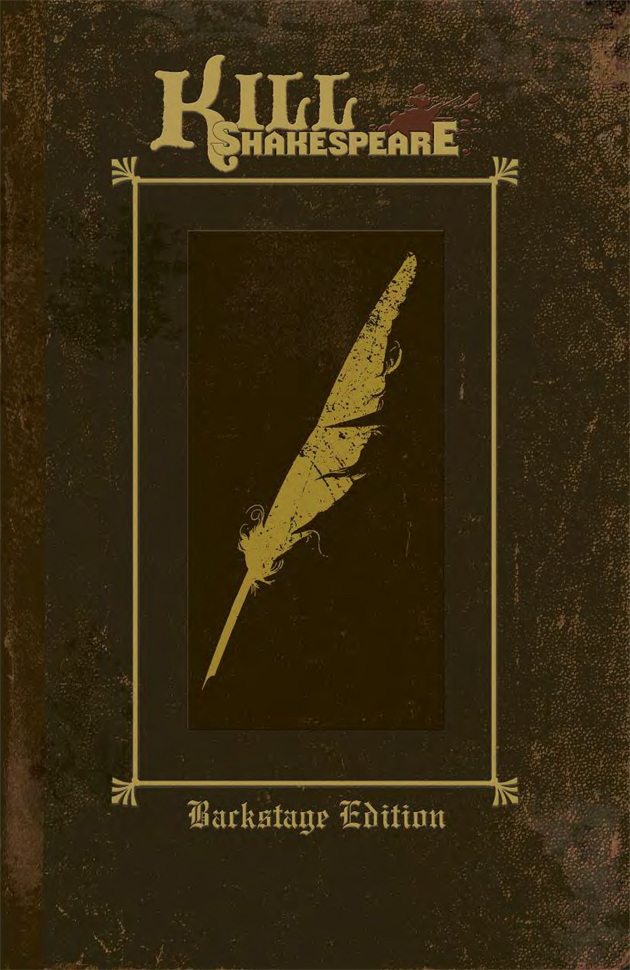 Sometimes, the title just makes you want to grab the book. I feel like there are few titles less tempting than IDW Publishing‘s comic series Kill Shakespeare.

I know for a fact, the true brawlers will like the series created and written by Conor McCreery and Anthony Del Col. We’ll wait for Eric’s review of the next four issues to find out for sure, but I’d put smart money on him liking it. We’re going to break the series down by issues of four, and we’re reading out of the slick “Backstage Edition,” which is a finely packaged piece in itself.

Props to the art by Andy Belanger, and the covers by Kagan McLeod.

Issue one: A Sea of Troubles

“Whether ’tis nobler in the mind to suffer

The slings and arrows of outrageous fortune,

Or to take arms against a sea of troubles,

and by opposing end them.”

In issue one we’re introduced to the Shadow King, Hamlet (naturally), who is shipwrecked and washes up on the shore of Richard III’s kingdom that he rules with MacBeth (well, more like Lady MacBeth). I’m going to try to stay away from plot points, as I would rather not ruin the joy of getting introduced to the various Shakespearean characters in new and fun ways. And, no, I’m not talking about them being cast as steam punk robots or high school sweethearts. (Not that there’s anything wrong with that).

The series starts well. There’s a shipwreck, a ghost, good art (the panels with the swords coming out of the water are great), comic-style voice over, pirates, mystery and magic.

The first issue gets you hooked in, and a classic line to end. It establishes that these are Shakespearean characters, but this is a different world.

The idea of Hamlet having to kill Shakespeare to bring his father back to life is a nice touch.

Bonus about the backstage edition: there are character and line descriptors at the end of each issue giving those without an encyclopedic knowledge of characters a taste of the original text.

“By the pricking of my thumbs

Something wicked this way comes”

Enter Ratcliff, and others, as well, as new locales, new intrigue and more about this civil war between RIII and Juliet. Tell me I just didn’t sell you on that last sentence. What’s nice about the series is that characters come into play in different ways. Sometimes, they just show up, and sometimes they’re alluded to previously.

Iago shows up, and is very well written. We all know he’s evil, but we only know that because we’ve seen Othello. What if he’s part of a story that includes other cruel and conniving characters like R III and Lady Macbeth? How does he fit?

Read a find out.

Also, we have the introductions of the “prodigals of Shakespeare” adding a lovely touch of superstitious masses mixed with nerds that obviously really love the bard. Hmmm. Do I know any of those types?

The writers do a clever thing where they add Shakespearean lines or scenes into different situations. Richard III does his best Cornwall impression and takes some poor guy’s eyes out, while Iago ironically delivers the gem, “keep up your bright swords… or blood shall rust them” riffing on my favourite of Othello’s catchphrases.

Issue three: The Fool Doth Think He is Wise

“The fool doth think he is wise, but the wis man knows himself to be a fool,”

Alright nerds. Get ready for some boobs. It’s a sad fact about comic books that they focus particular attention to the vivacious curves of the well-endowed, and Kill Shakespeare is, unfortunately, no exception.

Yes, I like boobs like the best of them, but I mean come on. Every female character in a comic book does not have to have huge knockers no matter if they are the Merry Wives of Windsor or Lady MacBeth.

Ok. Rant done. Feminist inside of me argued for.

The Fallstaff/Hamlet scenes that take up a few pages in this issue are very fun, and one of those great ‘what ifs’ of Shakespeare. What if Fallstaff’s bombast was paired with Hamlet’s melancholy. A great what if answered in issue three. Also, what if Richard III and Macbeth were sitting at a table together? Answered.

Puck (Robin Goodfellow) shows up and his design is great. This is what makes comics fun: no reliance on human actors.

I should give a belated shoutout to colourist Ian Herring. His work stands out in the comic series.

And, dang, if Connor McCreery and Anthony Del Col go right into Poe-land, where Christopher Moore did in The Serpent of Venice. It’s a killer ending, and I won’t ruin it. I will, however, point out that Moore’s book came first. I’m not saying the idea was stolen, or that it doesn’t work every time, but still…

Issue Four: So Wise, So Young, Never Do Live Long

“So wise so young, they say, do never live long,”

Nothing makes a comic hum like a great first page.

The continuation of cross-dressing from issue three is a nice add to the story, as you can’t have Shakespeare without a little Gender Bending. Hey ho. Have you bought your copy of ‘Zounds! yet? I don’t know why I just thought of that. Hmmmmm. Click here.

Again, the writers are careful to hold characters back, so that we get humdingers like in issue four when probably the best ‘what if’ turns up when Juliet is paired with Othello. Yes! Can’t say I don’t dig that. Oh, and see how Juliet is designed? More of that.

Also, the weaselly Parolles is a great addition, as is Nerissa.

This is the first look at the other side of the civil war (although I feel like there may be more than just two sides). Much of the issue is build up with a very well-done payoff in the end. The close ups of Othello and Don John are nice, and when Othello lays eyes on Iago, even better. It’s an amazingly designed page with all the passion and emotion one would expect from the two if they were to see each other after the play Othello is finished.

There’s a reason why Othello is one of the Bard Brawl’s favourites. The characters from that play always add a huge chunk of amazing.

Come back next time when Eric continues with issues five through eight of Kill Shakespeare.