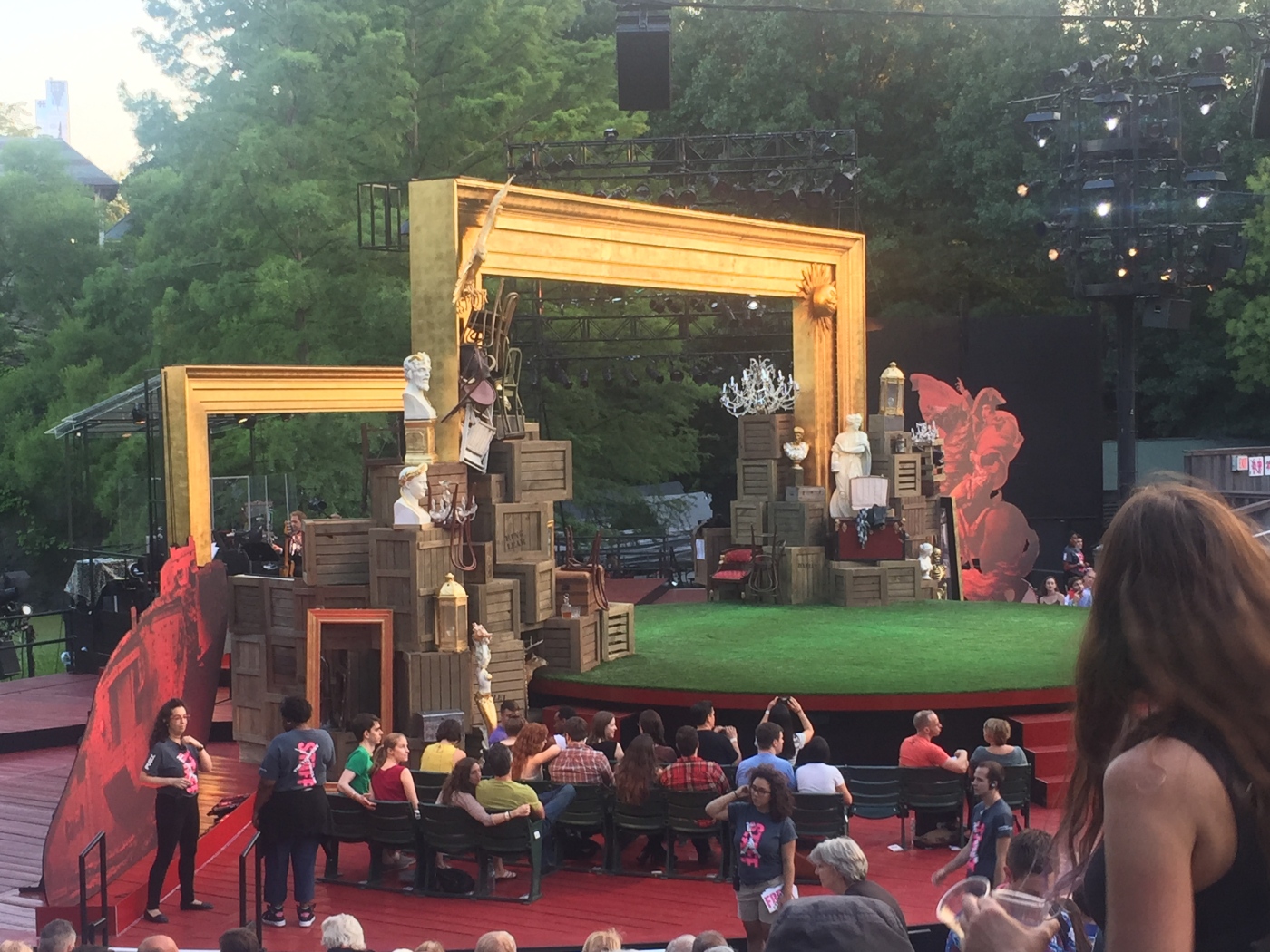 Oh dang. Watching American Horror Story Freak Show the other night, I realized, after seeing the always charming, chilling and a little bit creepy, Lily Rabe, that I had neglected to post the review I wrote in the summer of Cymbeline in which she starred. Twenty-eight lashes and three monologues of private lamentation later, I thought, why not just post it, and remember warm nights in the summer and brilliant productions of the bard.

I have always, always, always wanted to see a play in Central Park, NYC. It’s one of those things all bard brawlers must do at some time, and, thanks to a lovely person from New Zealand, I got a couple of tickets. Oh, and I took a friend who had never been to a Shakespeare play before! So many lovely things right there.

(My friend Rene won the free tickets and gave them to me. Such a darling)

Boom. Bring on Cymbeline, an incredible play that I also saw last year at Bard on the Beach in Vancouver.

It was, simply put, great.

It is a great play to begin with full of craziness, funny stuff, pastoral, politics, history and a guy getting his head cut off. Always a nice touch.

The Public Theater production at the Delacorte Theater in Central Park centres on starred Lily Rabe of (as noted) as Imogen, and Hamish Linklater getting the double role of Posthumous and the scene-stealing Cloten.

First off, the opening of the play was great. Director Daniel Sullivan has those “turn off your phones” guys both welcome people, and thank sponsors (people actually clapped for the Bank of America. Weird). Then, the cast came out on stage and real audience members asked questions to get the crowd into the play, and, BANG, play starts. So smart. The effect was perfect. Everyone was laughing and ready to get set for what is a very strange and great play.

Rabe and Linklater were great.

Rabe has this incredible ability to be beautiful, and tragic, and funny, and weird all at once. A think I loved about her performance in Cymbeline was the way she moved. She didn’t do that predictable puffed out chest, “Victorian” stance that I seem to see so often in Shakespeare productions. She moved more hunched over and slinky, so, while she definitely commanded attention on stage, she also gave the character a bit of needed vulnerability.

Linklater was side-splitting hilarious as Cloten, as well as mopey, love-torn, romantic as Posthumous. A particularly incredible scene featuring both leads was the “Hark, hark the lark” song, Cloten serenades the girl who is “supposed” to love him! Why don’t you love Cloten?! It’s perfect.

Linklater even was able to make the particularly troubling speech about killing Posthumous and raping Imogen ridiculous and funny. He delivered the intense line with the false bravado of a 14-year-old spazz, and thus could be laughed at without feeling horrible that you’re laughing at some pretty gross stuff. Hey. Dark comedy is still comedy am I wrong?

Patrick Page was also great as Iachimo; full of energy, conniving spirit and all of that fun stuff. Actually, pretty much every cast member did their job and did it well.

The set was very well-built. Props for making sure it was whimsical, but not overbearing. A single circular platform that came up from the floor was the only moving part, which was effective and gave a nice throwback to the Elizabethan trapdoor trick.

Oh, and a racoon scurried onto the set during the production I went to. It was delightful, unplanned, and had nothing to do with the play, but, hey, animals should always get a nod if they happen to show up. I’m pretty sure the racoon just wanted to catch a bit of the play. Why wouldn’t he?

One thought on “Cymbeline in Central Park, a perfect summer night”