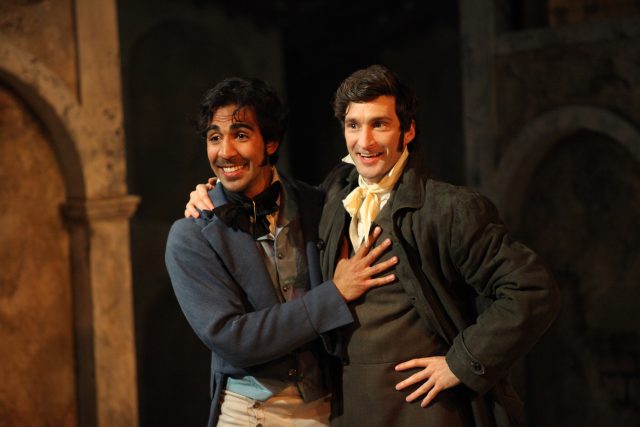 Bard on the Beach always pulls an obscure play out of the cannon this year opting for the early comedy The Two Gentlemen of Verona. The play runs through the summer and would be wise to catch while it’s around.

Okay. Let’s break this down.

The Two Gentlemen of Verona follows Proteus (Charlie Gallant) and Valentine (Nadeem Phillip), two young gents from (where else?) Verona to Milan where they are supposed to be expanding their minds and bettering themselves as young, affluent gentlemen.

Instead, they end up at odds over the same woman – Silvia (Adele Noronha) – even though Proteus had quite recently promised himself to Julia (Kate Besworth), who is back in Verona.

Turns out, Proteus doesn’t have the best attention span or forethought as he jeopardizes not only his long friendship with Valentine, but also his future with Julia, who shows up not long after, disguised as a man named “Sebastian.”

“Sebastian” arrives just in time to find Proteus serenading Silvia outside her window.

Meanwhile, Valentine disappears and is presumed dead, giving Proteus a golden opportunity to make a move on Silvia.

To add insult to injury, Proteus gives “Sebastian” a ring to deliver to Silvia as a token of his affections. Too bad it’s the same ring Julia gave him before he left Verona.

For her part, Silvia sees through Proteus’ efforts to the spoiled sociopathic man-child that he really is. Also, she’s not totally in the mood for dating since the real subject of her affections – Valentine – is lost and probably dead.

Silvia – not convinced that Valentine is dead, since it was Proteus who delivered the bad news, and who believes that guy anymore? – sets out to find her lost love. Only to get captured by a band of outlaws.

A noted deviation from the original: in Bard on the Beach’s production – directed by BOB legend Scott Bellis – the outlaws are all women disguised as men. This gives the final scene, which is questionable – at best – by today’s standards, a much more light hearted feel than in the original play. Especially when Proteus catches up with Silvia and tells her he will, “force thee yield to my desire.”

Wait. I thought this was a comedy.

As one of Shakespeare’s early plays, Two Gentlemen of Verona is certainly not the Bard’s most refined work. Several elements from this play are seen in later plays to greater effect. Such as cross-dressing (the Merchant of Venice, Twelfth Night) and the swapping of romantic partners/interests (All’s Well That Ends Well, Measure for Measure). This play felt a bit like an experiment that the Bard returned to and improved upon in later works.

That being said, Bard on the Beach’s production was a fun misadventure of love, unrequited love and mistaken identity. An interesting aspect to Shakespeare’s plays is that while comedy styles change dramatically, tragedies stay more or less the same.

A play like Romeo and Juliet was relatable when it was written, it’s relatable now and it will continue to be relatable because falling in love and having your heart broken are things that nearly everyone on the planet experiences in one way or another; but humour doesn’t seem to work the same way.

But even the best sitcoms from ten years ago are full of jokes that have lost their punchline or become politically incorrect. For example, Dave Chappelle’s recent special on Netflix is full of the same type of humour that made the comedian famous in the 90’s. But now it feels mean and bigoted.

In this play the part of Julia went to Besworth who did a decent job as both Julia and Sebastian. But the situational comedy of Julia – disguised as Sebastian – delivering love tokens from Proteus to Silvia was mostly obscured by two things:

One, cross-dressing isn’t that funny anymore. It’s not insensitive or politically incorrect the way that transgender issues have become no-no’s for comedians, but it’s not surprising or controversial either.

Two, I would say the intended joke in this situation is that Proteus spends most of the play digging his own grave while the audience waits for him to be served his just deserts. That’s classic situational comedy and still funny today, but in the context of Two Gentlemen, Julia’s role feels more pathetic than funny. She’s just a woman with a shitty boyfriend, but for some reason she’s inclined to keep working on their relationship while Proteus acts only to serve himself. If someone wanted to update this play for modern audiences, they might do well to re-script it as a tragedy.

The fact that Shakespeare’s comedies are still getting laughter and applause a few hundred years later is an astonishing feat. Granted, a good deal of the laughter at Bard on the Beach came from the ad-libbing of Andrew Crownden as Launce and Chirag Naik as Speed who definitely stole the show. The two – especially Crownden – broke character from time to time and even broke the fourth wall once or twice.

Normally I hate it when actors do this, but sometimes it works and Crownden’s comedic timing was very good. Especially when he tried – in vain – to get his dog Crab (Gertie the Basset Hound) to do tricks on stage.

Apart from Crownden and Naik, the acting was amply entertaining for the most part. Valentine (Nadeem Phillip) plays a mostly secondary – and static – character, despite being one of the two titular gentlemen. Phillip played the part well enough, but I wouldn’t judge his acting ability too harshly from this roll.

Proteus did a good job of being a sleazy villain, although I found Charlie Gallant was – at times – a little over the top in his performance.

Adele Noronha as Silvia gave the most humanizing performance of the cast. In a comedy full of mostly dated punch lines and flat characters, Noronha’s warmth and sincerity really connected with the audience.

Director Scott Bellis successfully adapted Two Gentlemen of Verona with a few tweaks that made the play acceptable for families, but in a way that preserved some of the darker elements in this light hearted comedy.