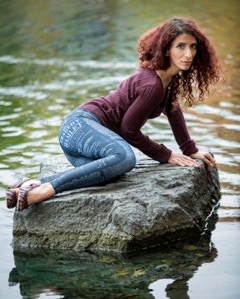 Put on your Hamlet tights, and take a trip to a park this summer for some Shakespeare, always a good date night. (Model: Saphia; Photo Credit: Jacques Carrière; Leggings: Black Milk Clothing)

Summer is upon us, and as such that brings a slew of Shakespearean productions ready to be gobbled up by those venturing into the open air for some culture, comedy and maybe cultish murders.
The Bard Brawl has been entertained by a number of companies in various places, and, as a promo/bumper/preview of what’s to come, we’re going to highlight some of our favourites, all of which are putting on some exciting plays this summer.

Bard on the Beach

Vancouver, BC’s premiere Shakespeare festival of the summer is the one at Vanier Park, and this reviewer has seen upwards of dozen renditions of various plays. BOB always has a few gems, and even the ones that aren’t four-star productions, still wind up being worth a look.

Dang if they didn’t pull out three absolute beauts: Macbeth, As You Like It, and, one of the most underrated of them all: Timon of Athens.

BOB also puts on one non-Shakespeare play a season and this year it is Aristophanes’ 411 BC comedy Lysistrata, a play centred around the first-ever female strike; perf.

An Bard Brawl insider has seen both Macbeth (he thought it was okay) and the Beatles-inspired As You Like It (loved it), and it sounds like both are worth seeing.

I would like to plug Timon. It’s designer Stephanie E.M. Coleman’s favourite play, and check out the description on the site:

Colleen Wheeler stars as Timon, a privileged Vancouver woman whose generosity has no limits. When she loses her entire fortune, will her community still stand by her? Shakespeare’s powerful exploration of capitalism and greed is a parable for our times. Timon invites us to think about our place in a shallow world and to look beyond the wealth of the pocketbook towards the wealth of the heart.

Here’s the link for tickets.

This fine theatre was super accomodating when a couple of brawlers took the trip south, and the theatre is super charming and cool. If you don’t fancy struggling to buy tix for Central Park’s theatre offering in Manhattan, take a train and check this one out. Really good stuff.

Outdoor the theatre is doing The Servant of Two Masters (June 20 – July 29), an adaptation of the Italian play by Carlo Goldoni.

Last seen eight years ago at the Outdoor Stage, we’ll present a fresh new production of this 272-year-old slapstick comedy. This wild Italian romp will pull you in as Truffaldino makes the audience privy to and complicit in his increasingly complicated attempts to serve two masters at one time. Doug West, fresh from his success with It’s a Wonderful Life: A Live Radio Play, will direct the exuberant craziness. Don’t forget to pack your picnic for al fresco dining as we transport you to 18th century Venice!

What else they got?

Only the bloodiest, weirdest, craziest of all the bard’s treasures: Titus Andronicus.

So many characters, so much blood, so many pies… Where to start with this one? Feel free to check out the Bard Brawl podcasts on this play, and you’ll be sold.

Three theatres have two plays coming up that are constantly in circulation for outdoor productions: Ro and Jo and Midsummer.

The Shakespeare in High Park productions in Toronto are… sigh… inhale…

It seems like Repercussion is taking the most tired of Shakespeare plays and spinning it in an interesting way: both Romeo and Juliet are females.

Romeo & Juliet: Love is Love is the title, and it kind of says it all. Perusing the cast, it seems like this could be one to catch for sure. Fun fact: I was in a play with Nadia Verrucci once. She’s a great actor.

To be clear, the play is a good one, but it is very often produced in a way that causes it to miss the point (see Bard Brawl podcast discussions on the topic).

Regardless, the plays are free and produced all over the Montreal area. Check the schedule and book a date night. I’m eyeing the July 6 production at the Mont Royal Cemetary. Great venue.

Toronto’s plays are also free, and though this snob thinks R&J and MND have been put on far too often, they can surprise and be a delight. The Bard Brawl has not yet visited the High Park Amphitheatre to check out Canadian Stage’s production, so maybe a road trip is in order.

Regardless, pay what you can is a great thing, and no one should avoid taking in a night of theatre.

The Kelowna production is the only one that costs ($30. Not bad), and the locale makes it kind of worth it in the end.

Shakespeare in Central Park just finished with Othello, which I will forever kick myself for not getting to, but it’s not over for the summer if you want to catch a play in Central Park.

Twelfth Night, one of the funniest plays in the cannon if done properly should be a must to check out. Let us know if Sir Toby Belch comes close to Jay Reid’s rendition of him.

Anyway, Central Park is the big deal for Shakespeare in the park. I caught Cymbeline a couple years ago, and it was very good.

If you’re checking anything out this summer, let us know where, and what you think of the production.