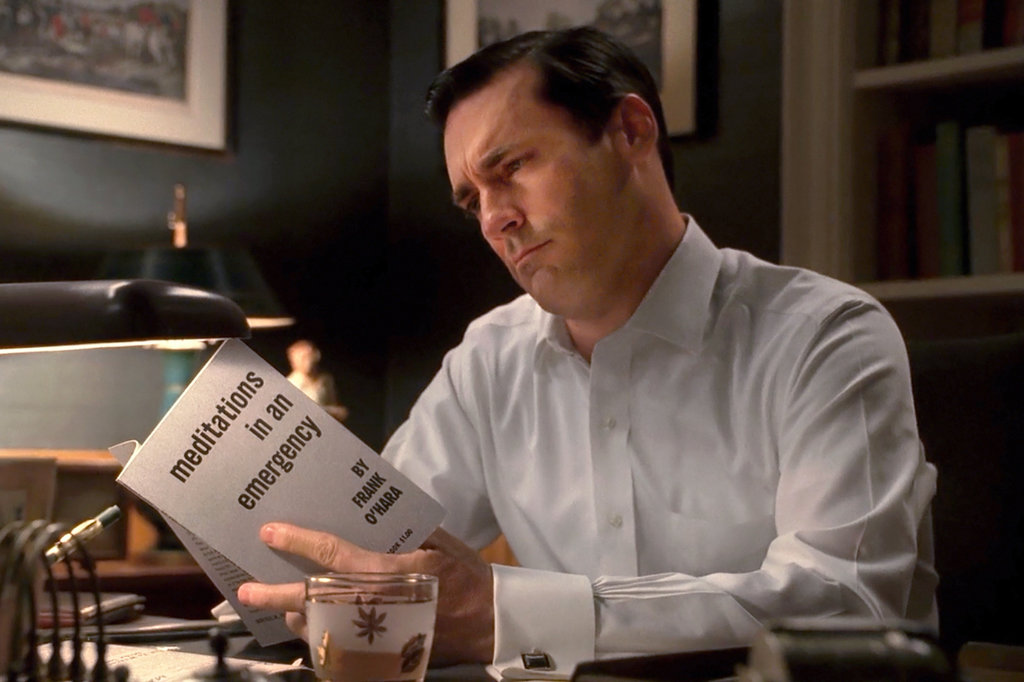 It is season two. Peggy is skinny again (post baby), Harry Crane’s wife is pregnant, Trudy Campbell is not, Betty is taking horseback riding lessons and giving them in flirtation, Don’s blood pressure is up, and there is a photocopier in the office.

It is the future.

The president (JFK) is young and hot, the agency needs to match, and a hipster is reading Frank O’Hara in a bar at lunch.

It is S2E01 (For Those Who Think Young), and the collection is Meditations in an Emergency.

Don takes the snide comment to heart, takes the book and reads it.

I read it too. It’s a very fine collection of poems.

This is the seminal book of the season, but it’s really all about one poem: Mayakovsky.

Here is the poem:

Here is Don’t reading of the final stanza:

“Meditations in an Emergency” is also the title of the season finale (S2E13) making it the bookends to the sophomore season.

At the end of S2E01, Don mails the book to someone. SPOILER: It’s to Don Draper’s (the real Don Draper) wife Anna. I’ll leave that there. We had a pretty solid discussion of Anna in relation to Sound and the Fury.

O’Hara’s poetry is the perfect backdrop to season two of Mad Men.

Long may you illumine space with your marvelous appearances, delays and enunciations,

and may the money of the world glitteringly cover you as you rest afte a long day under the kleig lights with your faces in paces for our edification, the way the clouds come often at night

but the heavens operate on the star stystem. It is a divine precedent

you perpetuate! Roll on, reels of celluloid, as the great earth rolls on!

To the Film Industry in Crisis, Frank O’Hara

Don loves films. He uses it as an excuse for not being at the office. He watches Daughters of Destiny. He later takes his son to the movies.

O’Hara’s poetry in it’s straight forward style, descriptions of the real, engagement with pop culture, and active intellectualism kick starts the season and foreshadows a country and world turns to the future, and becomes a beautiful catastrophe.

Don is a catastrophe this season. Betty begins to look straight at it, and ignore the charm and beauty and see only the catastrophe.

Of course, Don is not the only catastrophe, and Don is never incapable of seeing and discerning catastrophe and dodging it (for now at least. There is still some of the Rand superhero in him).

Don is talking in flashback to Peggy in S2E05 (The New Girl) after she’s had a baby and doesn’t know why she’s in the hospital or what’s wrong with her.

Modernism continues to feature in the series in the books characters are reading, fashion they’re sporting, and art hanging on the walls.

Don, however, will continue to wear the grey suit on the outside, while inside modernity pulls him.

Don has affairs this season, battles with Duck and Pete, goes to California, flashes back to the life he is trying to build past, and the whole time attempts to make that pile of a catastrophe seem beautiful.

The season features nods to the arms race, space race and nuclear annihilation.

The final episode of the season takes place amid the Cuban Missile Crisis. Meditations in an emergency indeed.

Season two was leading up to this episode, and the series in itself returns again and again to meditations in an emergency of some kind or another. Each character meditates on certain doom in different way.

Funny though how the boys in the agency are more anxious over the British takeover than they are about missiles destroying their world. These are the meditations of men blind to the world.

A word on Mayakovsky.

Mayakovsky was a futurist, critic, and Bolshevik and he committed suicide in 1930 distraught in love and politics both. His funeral was the third largest in the Soviet era behind just Stalin and, of course, Lenin.

His eagerness for the future plays into O’Hara’s poem, Don’s reading and Mad Men itself. The show is very much a battle between traditional views and modernity. Betty, Roger, Trudy and others pull towards the past, while Harry, Bert, and Peggy pull forward.

Then there are those in the middle. Those that seem pulled by both forces. Don, Pete and Joan show both sides, and the complexity that living with embedded traditions while trying to navigate the future creates.

Mayakovsky looks the future as the goal, the past as the lesson, but finds the present unlivable. Don feels he’s ruined everything in one of his rare candid moments when he talks to Anna in California and walks into the ocean.

SPOILER #2: He does not commit suicide in the series though there is a constant foreshadowing that he might. (I certainly thought he would)

A word on O’Hara.

From the Poetry Foundation: Frank O’Hara was a dynamic leader of the “New York School” of poets, a group that included John Ashbery, Barbara Guest, Kenneth Koch, and James Schuyler. The Abstract Expressionist painters in New York City during the 1950s and 1960s used the title, but the poets borrowed it. From the beginning O’Hara’s poetry was engaged with the worlds of music, dance, and painting. In that complex of associations he devised an idea of poetic form that allowed the inclusion of many kinds of events, including everyday conversations and notes about New York advertising signs. Since his death in 1966 at age forty, the depth and richness of his achievements as a poet and art critic have been recognized by an international audience.

Subject, poem and poet slide into the Mad Men story with ease. I’ll end with a quote.

I love you. I love you,
but I’m turning to my verses
and my heart is closing
like a fist.