Peggy is visiting her sister, Anita, in S2E08 (A Night to Remember) and drops off C.S. Forester’s Hornblower in the West Indies for Anita’s husband, Gerry Respola, who’s laid up with a “bad back” and “hates his job.”

Gerry isn’t in the episode and no one’s seen reading the book, but it’s on screen, so I read it.

Basic summary: Horatio Hornblower is Commander-in-chief of His Majesty’s ships and vessels in the West Indies and trying to keep order in the post-Napoleonic War world. He fights pirates, revolutionaries, a hurricane and all the things you’d expect in a swashbuckling, sea-faring, tall ship adventure.

He is full of honour, does the right thing, and is loyal to his doting wife and son.

It took us a season and change, but ladies and gents, it’s time to dig into some Fitzgerald.

Feels like Gatzby should have made its way into the plot by now, but I’ll take a short story. Let’s do it.

In S2E03 (The Benefactors) Arthur Chase (the hunky young horse rider Betty flirts with played by Gabriel Mann) says to Betty after a day of riding:

“You know the Scott Fitzgerald story “A Diamond as Big as the Ritz?” Her house is a slightly smaller version of my high school, and I realized why she was so happy all the time and she was so angry when she didn’t get what she wanted.”

(Arthur’s talking about his fiancee).

Arthur is sure, as all men are in these situations, he knows what Betty is thinking, and that Better must want him. Betty, Arthur “knows,” is not like that.

Betty snaps back, “You don’t know me.” 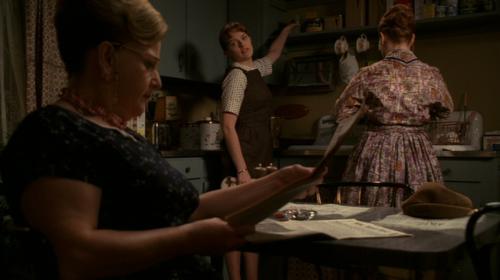 Two episodes into the second season of Mad Men and Peggy is visiting her mom and sister in Brooklyn. After an awkward meal full of undertones, nagging, guilt and jabs (you know mother-daughter-sister stuff), Peggy asks her mom (Katherine played by Myra Turley) if she has anything to drop off or pick up at the library.

“I have to renew the Agony and the Ecstasy. It’s taking forever,” says her mom.

And there it is, another book for the list.

This one almost ended the reading list before it got out of the gates.

Bertram Cooper calls Don into his office in S01E08 (The Hobo Code), tells him to take his shoes off and then offers him a huge bonus ($2,500).

Then he says the following:

I had no interest in picking up another Ayn Rand book after ploughing through The Fountainhead (because a friend insisted I “had to” read it), and I certainly didn’t have a tonne of appetite for Rand’s final novel: the “dramatization of her unique vision of existence and of man’s highest potential,” her 12-year project, her longest book (1,168 pages), the tome of tomes: Atlas Shrugged.

Throughout Mad Men, books appear that are a direct reflection of characters or the period they live in. There are books characters are reading in which, in a real meta moment, characters feature that are the templates of themselves.

Mad Men is, in essence, a period piece, and props in any period piece are essential. Viewers will turn on a show if a character glances at a digital wristwatch, is leafing through a copy of Game of Thrones or a is wearing a pair of Jordan VIs.

Just check out the list of goofs people spotted if you’re unsure. Gotta respect the how much people care. Heck, I’m one of them, so I ain’t complaining.

There are two books in this episode, and I am starting with the one that comes second in the episode: Exodus.

Am I the only one that cares enough to mention that? Probably.

Exodus, by Leon Uris is the book that started the Mad Men reading project for me. The book was, as I’ve written before, sitting on my bookshelf when I was watching the episode (S01E06, Babylon) for the second time, and because it played such a prominent role in the episode, and I hadn’t read the book, I stopped watching, read it and continued on.

After delving and diving into D.H. Lawrence in episode three of the first season, we get a quaint bedtime story in episode four read by Betty Draper (January Jones) in her sultry and soothing voice I dare anyone not to drift off into a lovely dream after hearing.

We have, ladies and gents, our first fairy-tale in Mad Men.

“Church bells rang out and the air was full of flying birds.

What a joyous parade it was back at the palace.

No king could command anything finer.”

Bobby is crashed out and Sally is wrapped in attention as Betty reads the final lines of a story in Nursery Friends From France (translated by Olive Beaupre) in S01E04 (New Amsterdam). One thing, I read the entire book and never found those lines. If anyone knows what nursery rhyme this comes from, I’d love to hear where it came from. I never found those specific lines in the version I read.

The first book that appears in the show is the D.H. Lawrence classic and being passed around by Joan Holloway and a bunch of the secretaries. Peggy Olson comes in and eventually leaves with it.

Joan says of her pocket book in the scene, “it’s got a change of clothing and a toothbrush in it.”

This is the book I’m currently reading:

Before looking the book up at the library and taking it out, I had not heard of the author or title, and had never before thought of reading it.

So why am I reading it?

The whole thing started when I was re-watching the series before the final season came out. In S01E06 (Babylon), the character Lily Meyer (Irene Roseen) hands Don Draper (John Hamm) a copy of Exodus, by Leon Uris, and told him he needed to read it. I looked at my bookshelf and noticed I had a copy of that book and I’d never read it.

I stopped the show, started reading and then finished the book. I went back to the episode and was blown away by what reading the book did for the episode and greater understanding of the particular story arc that was progressing.

I decided then to continue the process. Thankfully, the New York Public Library had compiled a list, so I could anticipate books and verify titles.

It has taken me a long time to get through the series.

Here is where I’ll talk about it. I welcome your thoughts as always, and thank you for joining. 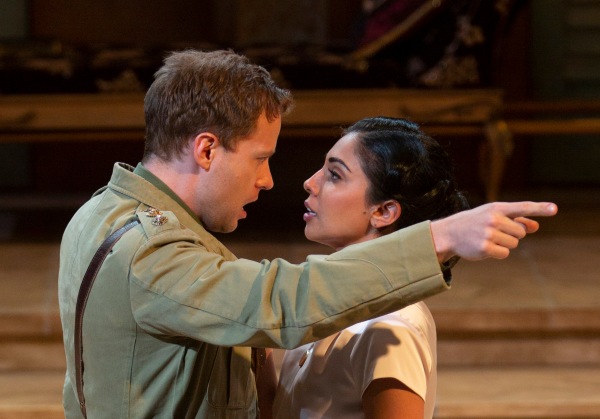 Bard on the Beach’s All’s Well That Ends Well takes the audience back to post Second World War India and the lead up to Indian independance. (Edmund Stapleton & Sarena Parmar; photo: Tim Matheson)

All’s Well That Ends Well, a ‘problem play’, as it is often described, does not fit easily into any classification.

Bard on the Beach‘s 2019 production is set in 1946/47 India and leading up to independence from English rule, which were indeed problematic times for the country. There are moments of comedy, but also tragedy and civil unrest.

Issues of colonization, privilege, identity, culture, race and gender are evident in the production, and sometimes uncomfortable to watch.

The production starts with a very British feel both in the sets and costumes, but moves into the colourful, warm and vibrant Indian culture as the play progresses.

The second half starts with beautiful colour, dance and music and thoroughly livens up the atmosphere.

Why Helena (Sarena Parmar) would love Bertram (Edmund Stapleton) when he is such a pompous British snob and doesn’t want to marry her because she is beneath his station is not quite believable. Then again, she wouldn’t be the first girl to fall for a dud if we’re being honest. That said, I was not fully convinced even at the end when Helena reveals herself to Bertram.

The use of a second language (Hindi and Urdu) without interpretations was tough to comprehend for those, like this reviewer, who didn’t understand. Props to BOB for acknowledging, however, the large southeast Asian population in Vancouver and giving those so often left out of Shakespearean productions a prominent space in the play. Some audience members were enjoying the dialogue, but it was lost on those who only understand English, and Shakespeare’s English at that!

Co-directors Rohit Chokhani and Johnna Wright have taken a bold approach in this adaptation of All’s Well that Ends Well.

The sword fight and dancing are highlights of the production and give life and energy to the stodgy British actors.

The subplot with Bertram’s companion Parolles (Jeff Gladstone) does not seem to fit with the rest of the play and reflects badly on Bertram’s lack of charisma. I just didn’t see where he fit in.

The play ends with Indian and Pakistani flags unfurled and the fighting continues with Hindus, Muslims and Sikhs brawling. Another mess left by the British Empire.

The play, for its complicated language and sometimes confusing subplots, is unique and still one worth seeing. I continue to commend BOB for always making the plays interesting and relevant. They never fail to take a chance, and should always be checked out.