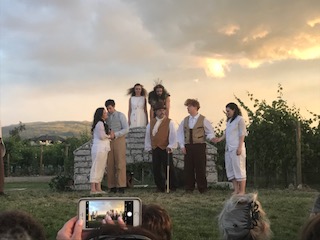 Seating was not great, but the play within the play stole the show at Shakespeare Kelowna’s Midsummer Night’s Dream that wraps Saturday. (Kathleen Rowe, The Bard Brawl)

This play is a delight and full of spirited dialogue and physical comedy.

Set against the beautiful Spierhead Winery (Spearhead? Which is it?) in Southeast Kelowna A Midsummer Night’s Dream was enjoyed by a full house of appreciative Shakespeare fans (and probably a couple, who got dragged along by said fans).

Shakespeare Kelowna is celebrating 25 years of bringing the bard to life for Kelowna audiences and the reaction of the audience proved that they are doing a splendid job of it.

END_OF_DOCUMENT_TOKEN_TO_BE_REPLACED

Steam punk, Chuck Taylors, umbrellas, a lion and Daft Punk’s “Get Lucky,” and you’ve got yourself the ideal play by English Renaissance playwright William Shakespeare.

The Bard on the Beach started its successful run as Vancouver, BC’s premier Shakespeare performance troupe with A Midsummer Night’s Dream, so it’s no surprise that in celebrating its 25th year, the players were at it again.

Actually, it’s no surprise that any troupe is doing the play during the summer; it gets put on a lot.

It’s glaringly obvious why. Midsummer has fairies, love triangles, wacky actors, and invites a style directors like Dean Paul Gibson can push and play with. Bard on the Beach has done the play six times now. Gibson’s done it twice. This one’s got a marionette.

The Bard on the Beach production amps up the pop music, goes all-in on a melange of styles for the costumes, and misses no opportunity to push the whimsy and fun of the play. My dad and sister, who admitted to never liking Shakespeare, and who would rather pay for a six pack than a ticket to a play, both LOVED the production. My sister couldn’t believe how funny it was.

Purists poring over heavily dogeared and highlighted copies of the play probably will complain about Gibson’s use of Top 40 songs and some of the style choices. They complain about most things. Can’t please everyone. So it goes. Back to the library with you.

One critical friend of mine thought the choices bad, and suggested the director added the music to draw a bigger audience. Maybe. Then again, Midsummer always draws an audience.

Bottom (Scott Bellis) and Puck (Kyle Rideout) steal the show. Both actors chew up the scenery when onstage, and act head-to-toe with the energy that must make all directors feel warm at night.

Bellis, as ‘lead’ in the theatre troupe rehearsing for the wedding of Duke Theseus (John Voth) and Queen Hippolyta (Adele Noronha), is a standout missing no chance to push his farcical talents. His hair, makeup and costume only add to the character.

Rideout, as the fan favourite Puck, wears that tutu and pair of Chuck Taylors like a pro. Though purists will not appreciate the selfie he takes when accidentally self-medicating with a love potion herb, the audience loved it. In a particularly clever scene as the play is coming to a close that even the ultimate purist will appreciate, Puck mimics walking a tightrope down the middle of the stage cleverly highlighting the fine line between chaos and normalcy, love and hate, reality and fantasy, theatre and the real world: brilliant.

The official program describes the plot as such:

Oberon, King of the Fairies, is upset with Queen Titania. He commands his servant Puck to produce a magical nectar that will cause love at first sight. The mischievous sprite arranges for Queen Titania to fall for Bottom, a simple weaver (now transformed into an ass) while hilariously misdirecting the affections of four runaway lovers.

Nothing is untrue in the description, but the more experience one has with the play, the more one gravitates to Bottom and Puck, and whatever they’re doing. The Lysander, Demetrius, Hermia, and Helena cat-and-mouse/love potion stuff is fun, but is upstaged by Bottom and Titania (Naomi Wright), and their wierd fairy-loves-donkey, Puck orchestrated subplot. I won’t lie. Writing that sentence was fun.

Gibson also chose to stage the “Indian boy” as a marionette puppet, which was a very clever touch even if it was a little confusing to some in the audience like my dad and sister, who hadn’t read the play. The choice added to that blurred line between reality and fantasy the play is always treading.

The purist in me (yes he is there scowling and shaking his head all the time) did have a touch of pshah at the opening scene when Theseus delivers the following line as if he’s Romeo:

Hippolyta, I woo’d thee with my sword,
And won thy love doing thee injuries;
But I will wed thee in another key,
With pomp, with triumph, and with revelling.

I tried this line on a girl once. Big mistake. Not a ton of romance there.

Bard Brawl Sonneteer and ‘Zounds! contributor Maya Pankalla told me the other day the play was her favourite.

Those that know this particularly talented recently married brawler/zoundser (sorry boys) will get it right way.

For those that don’t: Midsummer is a must see for all who like the bard, fairies, whimsy, comedy, romance, and donkeys whenever it is produced. The Bard on the Beach production adds marionette aficionados to the list, and pulls the whole thing off with style.

Go see it. You have until the end of September.