The winds of fall were starting to cool, the leaves were in their final stages of clinging to the branches in Madison, New Jersey, and at long last, after years apart, the souls of Bard Brawl and Shakespeare Theatre of New Jersey met. Finally.

After a failed attempt to catch Pericles, Prince of Tyre last season thanks to a “snow storm” (come on New Jersey) we traveled to the quaint town of Madison and took in Henry VIII.

Let’s first give a big fits pump and major props to @ShakespeareNJ for putting on a play so rarely produced. Come to think of it, I don’t think I’ve ever seen Henry VIII on a playbill anywhere.

Alas, for those of you who didn’t catch it, we are sorry that you are too late. It was worth the fare.

As discussed often at the Bard Brawl (both podcast and blog), the play suffers from two facts that keep theatre companies from putting histories like Henry VIII on. (1) History plays are very complicated to those who aren’t familiar with the epoch and (2) the late plays where authorship may be questioned are sometimes avoided. It is what it is.

Fortunately for me, I went through a bit of a Henry VIII kick a while ago and have seen A Man For All Seasons, the incredibly addicting Tudors series, the unwatchable Other Boleyn Girl and David Starkey‘s two documentary series on the subject. I get obsessed sometimes.

To say familiarity with the characters helped in engaging Paul Mullins‘ production of Henry VIII would be an understatement, but that’s not a criticism of the play. Mullins’ direction is tight and on point and the story is followable if confusing. The confusion has nothing to do with the production. Shakespeare’s audience would have known the story well and would not have needed explanation on who was who and why that lord was important or not.

A friend that went with me admitted that she (a) understood nothing of what anyone was saying, but (b) really enjoyed the performance.

How did the paradox come to pass?

The characters’ words are hard to filter through at times and there is a lot of dialogue. The actors, however, emote and bounce off each other well and the audience can follow who is aligned with who, who is jealous, who is torn, who is tragic and so on.

Cardinal Wolsey (Philip Goodwin), and the Duke of Buckingham (Thomas Michael Hammond) stand out in their respective roles, and leave memorable imprints. Both have great arcs that go from powerful and pompous to tragic and torn.

Two roles that really need to be amped up with intensity in the production were Anne Bullen (Katie Wieland) and Henry himself (David Foubert). Both actors are very good, but sometimes are overshadowed by those they share the stage with. The story and importance of these two requires that they be comets among asteroids. Something about Bullen (sometimes Boleyn) makes the king change everything. This is a big ask, but one that needs to be answered.

Queen Katherine (Jessica Wortham) is another that chews up the stage even if something in me wishes she played the part more Spanish. (Katherine is of Aragon after all).

At this point I’m nitpicking. The criticisms do not in any way take away from the joy in watching the performances.

Mullins is apt and on point with bringing characters in and out of the story, filling the stage with tension and drama and leaving theatregoers satisfied in the end. Particular points gained for keeping the set simple, costumes on point and not adding too much that shifts attention from the characters.

Having only caught the show in its last week, I feel it my duty to put a huge plug in for the upcoming Much Ado About Nothing that hits the stage December 3. Let’s just hope there are no “snow storms.” 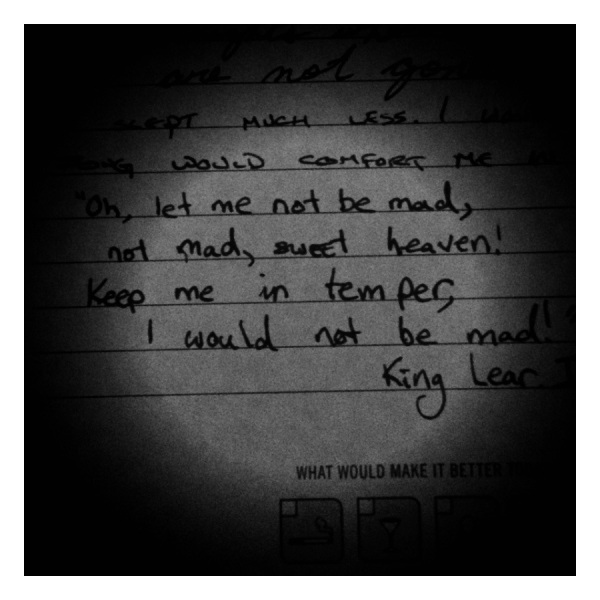 The Tudors created by that lover of historical English drama Michael Hirst (not the “atmospheric” musician by the way) had to have a little of the bard in it. Queen E One is in the freaking show after all.

Without going into a whole synopsis of the series, I’ll just say that it’s about King Henry VIII. Take three minutes for a refresher if you like.

In season three, Henry (played by love him or hate him Jonathan Rhys Meyers) fresh off lopping the head off the woman he created a religion to marry, finds a new girl, who dies and he is sad; being a king is hard.

Henry secludes himself with Will Somers, the fool played by David Bradley (the one from Harry Potter not the country music superstar).

The fool’s first line: “I don’t think – are you mad – thinking is dangerous. But I’ll wink.”

When watching this episode I kept saying, ‘Lear!’

Wait a second, maybe it was me that was going crazy.

The ‘mad’ king Henry finds comfort with his fool after the death of Queen Jane (3 of 6). Henry rants about building a castle that will be the envy of all the world and draws on the floor; oh the vanity of kings.  The fool mocks the king (naturally); a king all rightly fear. The fool says what all else want to (should?) say. The fool has a handful of scenes, but finds ways to deconstruct the entire series to that point in them.

The Tudors’ fool as well as Lear’s function on a different plane than the rest of the cast. The fools are not bound by the laws of decency  censorship or tact. This dropping of curtains pushes both the play and show. Henry VIII and Lear are disrobed and their insecurities are played on. This is why we love us some fool. They say such cool things, and they GET AWAY WITH IT. To be a fool and not king would be oh so great thing (I just made that up).

Somers never returns in the series, and we are left with a very singular episode that is unlike all the others. The plot moves on in the other scenes, but it is the scenes with the fool that define the identity of Henry’s character. They move the show beyond plot, and embrace character. One thing I despise about many TV shows is there obsession with just chugging the plot along in a series of twists and turns that lead nowhere (sheesh 24 got stupid).

The success of the Tudors is the success of its characters. I was not prepared to like this show, but did as it went on. Season three, episode five turns the plot yes, but not in a gaudy, awkward way. It just moves the character(s).

I’ve always thought that there is a lot of Henry VIII in Lear. Both have three kids, both have issues with them, and both are erratic and grapple with madness and tyranny. I like the comparison, and this episode shows how the comparison can work if done right. Shakespeare, as all living at his time, must have been tempted to slide a little Henry into his plays. He was not far removed after all.

Bard Brawl c0-creator and bearded master of English Renaissance and TV hater Eric Jean says the only good season of the Tudors is season one featuring Cardinal Wolsey. Yeah, I get it, but no, you’re wrong Eric. Wolsey is alright, but the wives, Thomas Cromwell, that creepy Seymour brother and a ton of others not to mention the fool, make the show worth watching to the end.

Full disclosure: I’m a total sucker for historical dramas. I even watched that horrible Camelot series.

The final scene of episode five seals it for me. The fool sits on Henry’s throne wearing a crown maniacally laughing after Henry has just destroyed Cromwell’s reformation and rewritten the Lord’s prayer.