A.D. Rowe
With Bard on the Beach in full swing during a sweltering Vancouver summer, Director Scott Bellis has taken Shakespeare’s The Comedy of Errors and given it the gears and gadgets of the Steampunk genre.
I know what you’re thinking, “Steampunk? Was that not a thing a decade ago? I mean, how can you add to the genre when Will Smith’s Wild Wild West filled the cup full?”
Well said and I did think the same going into the main stage on Vancouver’s beautiful Vanier Park looking out over English Bay. How many times have we seen a kind of kitschy genre played out once too many much to the audience’s chagrin?

Yet Scott Bellis and the Bard on the Beach cast delivered a delightfully entertaining performance using the Steampunk back drop to add colourful characters behind the scenes and flashy special effects right in the audience’s faces.

The widgets, levers and wire-rimmed glasses worked in and around Shakespearean forms of love, hate, jealousy, misdirection and slap stick found in his comedies.  The stage lighting tricks and quirky use of the monstrous Nurse, did nothing to take away from the fun of the mistaken identities and the foibles the followed.  It was not a nauseating ride through the planet’s core filled with distracting gooberfish  and the bigger fish that eat the gooberfish. It was a laugh fest coloured with smoke and lightening thanks to the design team including Pam Johnson (Scenery), Gerald King (Lighting), Malcolm Dow (Sound).

The play begins with the aging Egeon (Scott Bellis) from Syracuse thrown before the Duke of Ephesus and sentenced to death simply for being a Syracusian.  Sounds about right. Pleading for his life, Egeon tells his tragic tale of loss and how he came to be in Ephesus.  Many years ago on a voyage at sea a terrible storm separated Egeon from his wife and son leaving him with his other twin son and twin servant. Yep. All believable so far. Both children were called Antipholus and the servants Dromio and when Egeon’s remaining son left for Ephesus and failed to return, he has been on a decade long search for him.  The ever so generous Duke is moved by Egeon’s tale and grants a stay of execution granting him one day to come up with money for bail proving that all politicians are motivated by the promise of monetary reward (how can one not be cynical in these electoral times).

Meanwhile across town, Antipholus of Syracuse (Ben Elliott) and his servant Dromio (Luisa Jojic) have come ashore unaware that they have stumbled upon the home town of their twin brothers Antipholus of Ephesus (Jay Hindle) and Dromio (Dawn Petten). In the ensuing confusion created by mistaken identity schtick that Shakespeare does so well, the antics of the Dromios and Antipholi drives the energy and comedy of the play right to the closing curtain.  Hats off to Elliott and Hindle as they are thrown this way and that and even more so to Jojic and Petten who were spectacular in making the horrors of slave ownership and abuse quite funny as they were slap sticked around the stage. Hmmm. Feels wrong.

Costume designer Mara Gottler deserves kudos for capturing the feel of Steampunk especially with the minor characters nefarious Dr. Pinch, the mysterious Abbess and the monstrous Nurse Poppy. The iron gears and twisting metal made for a darker backdrop to the play and added a mysterious element juxtaposing the comedic performances in the foreground. Gottler does well by taking the darker science fiction/fantasy look and decorating the characters with horned rimmed glasses, old aviator helmets and trench coats.
When mixed with the sights and sounds of the stage crew, Bard on the Beach delivers a production of The Comedy of Errors that is a unique and wild and fun and a show that demonstrates how this company continues to keep Shakespeare alive in Vancouver. 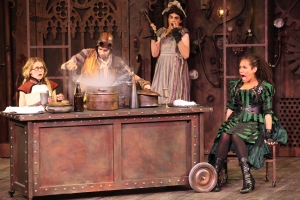 Check out the amazing writers and artists in ‘Zounds!