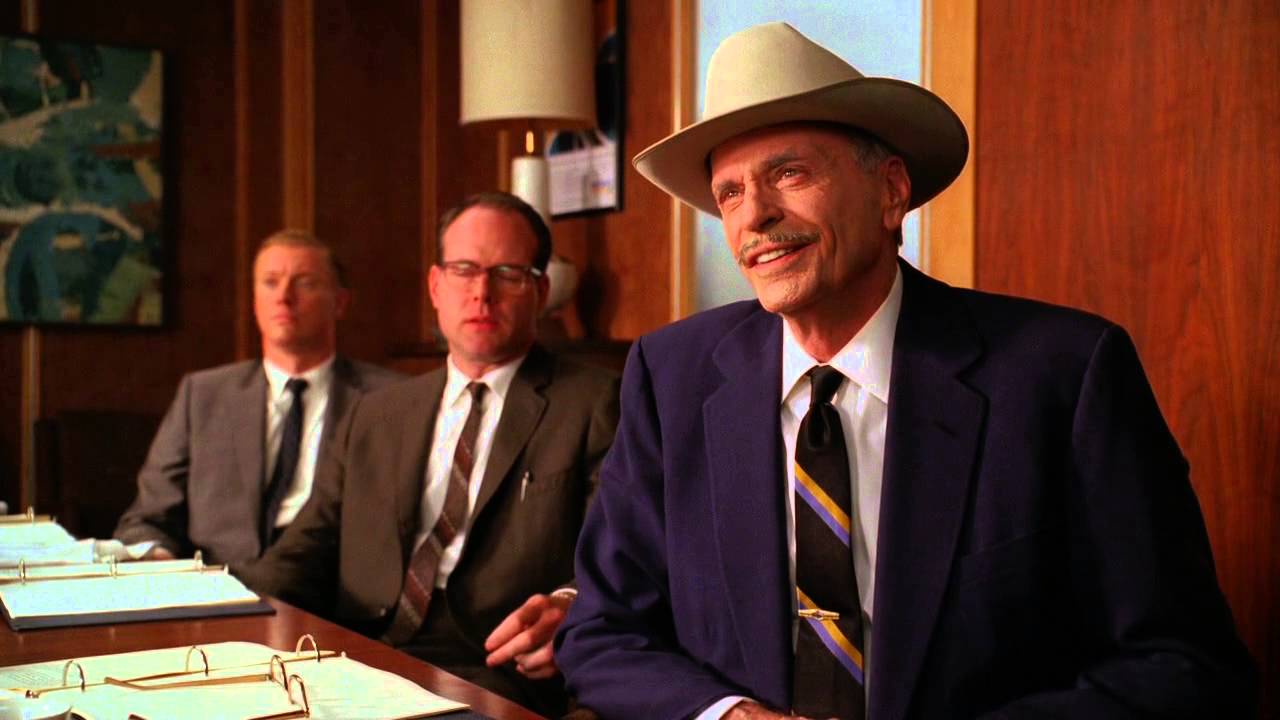 Conrad “Connie” Hilton (Chelcie Ross) first appears in S3E03 (My Old Kentucky Home) and Don makes him a drink. He calls later and then appears in S3E07 (Seven Twenty Three), which is when Peggy mentions his book.

“My mother gave me his book. He’s Catholic.”

Conrad’s character and the book (which I got through, and is okay) bring up themes of fatherhood throughout the season. He is constantly reminding Don of his duty to his family, and sliding into the absent fatherly role in Don’s life.

SIDE NOTE: Some times I get into conversations with people about this show, and have to defend it’s nihilism, it’s depressing characters, it’s bleakness… The complaints are valid, but, as a counter, it’s a pretty f*&(ing well-written series sometimes.

Oh, and before I get called out by the six people reading this, I should give a full disclosure and admit that I may have been influenced by podcast I listen to called Why are Dads? I’m not fishing for a discussion on the pod Sarah and Alex. Seriously

Connie plays the father, and Don goes along with it.

Connie’s autobiography also draws out the fathers in the show. At this point we’ve barreled through the complexities surrounding Don, Betty, Pete, Peggy, and Roger. (Lane is about to come in strong). All those characters also have children and have to deal with being parents of their own.

Don is both father to his kids (one of his stronger attributes), but he’s also very much the daddy to the men (and Peggy?) in the firm. Note how Peggy, Pete, Salvatore, Ken, Paul, Harry and sometimes Roger all come to him for fatherly approval which he rarely gives, but when he does, the reactions are important. They quiver.

“Who do you think you’re talking to?” Don with ice in his eyes says.

“I didn’t do anything but turn him down. He’s a bully,” Salvatore.

“I think you know that this is the way it has to be. You’ll do fine.”

Daddy has to do the dirty work.

That same episode has a perfect summary of the patriarchy in America that Connie feels he holds up, and there’s a sort of weird implication that he’s trying to teach Don how to be the next patriarch.

“It’s my purpose in life to bring America to the world whether they like it or not. You know, we are a force of good Don because we have God.”

“Sometimes your more than a son to me because you didn’t have what they have, and you understand,” Connie says in S3E09.

Then Connie shuts down Don’s campaign, and chides him like a little boy.

“You did not give me what I wanted. I’m deeply disappointed Don… What do you want from me? Love? Your work is good.”

Connie ditches Don after he finds out the there is a merger coming up, and then tries to explain that’s just how business goes.

Don calls him on it.

“I get it now Connie. It’s business.”

The scene is followed by Don’s adopted father ditching a farming cooperative while young Dick watches, and he decides to take action to save his agency.

They do, and next season we get a new office.

Later in the episode we see Don’s drunk father (Archie) get kicked in the head by a horse and killed. He curls up next to Sally after recalling that seminal moment.

He storms off in a huff after calling Betty a whore later. Ugh. Just when we had a warm feeling growing. Then a couple of scenes later, he is a grown up and is a genuinely good father with Bobby. Paradox to the end.

Don is drunk and drugged and about to get robbed.

Here’s the scene in full:

Then there’s Bert Cooper a couple scenes later when he wants Don to sign a contract:

Would you say I know something about you Don? Then sign. After all when it comes down to it, who’s really signing this contract anyway?

Don signs. Is Bert his father? Connie? His John of a father? Betty? Let’s leave that particular episode as the show did. With this song: